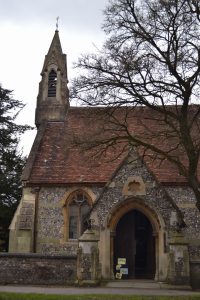 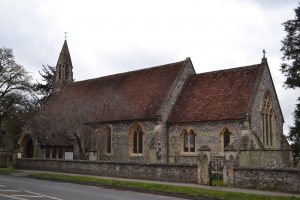 All Saints was built at the instigation of Isabella Lear, widow of the Dean of Salisbury, on land donated by Viscount Folkestone, and consecrated in 1854.  Designed by architect Thomas Wyatt, it is built in stone and cut flint in the decorated style, and comprises chancel with north vestry, nave, south porch, and stone gable belfry at the west end containing a single bell.  The interior is simple with only a handful of memorial tablets; a brass and marble tablet on the north wall commemorates the men of the parish who lost their lives in the 1914-18 War.  The east window (1959) is by Christopher Webb.  In 2007 we completed major work, as part of our 150th Anniversary programme, to extend the welcome area, install a toilet and kitchenette and move the pipe organ to a newly-built west-end gallery.